“I need someone who wants to live. The good, the bad, and the really really horrible days. The ones so trying they feel like an ocean we can never cross. And in the midst of it all, she smiles because she believes I’m worth it.”

He raised his gaze back to hers. “You were worth it to me.”

~ From Across Oceans (Hope or High Water Book 1)

Welcome readers! I’m thrilled to introduce you to the first issue of my new monthly newsletter. This is where I’ll provide updates related to all things in my world from progress on my latest novel to my recommended reads and upcoming events. I want you to be as excited to receive this newsletter as I am to send it, so feel free to send your comments and suggestions my way!

The past few months have been busy, busy, busy, and the next several are proving to keep me equally engaged. Summer in St. Louis is always a hot, humid, allergy filled place, but it also means family fun, camp for the kids, and vacation. Two weeks ago, we took a road trip down to Gulf Shores with my husband’s family for some time on Alabama’s beautiful beaches. We also saw history happen when the St. Louis Blues won the Stanley Cup for the first time ever and watched the Blue Angels perform at the National Naval Aviation Museum in Pensacola, Florida. If you’ve never had a chance to see these amazing pilots fly, you should make time to do so. It’s absolutely incredible.

I also couldn’t pass up the opportunity to complete some in-person book research as the Naval Aviation museum contained an entire section dedicated to World War I. Ah the joy and curse of a writer—we’re always writing even when we’re not.

While I did take a break from actually putting pen to paper during vacation, I worked tirelessly during the months prior to get as much completed on Broken Lines as I could. I’m about halfway through the first draft of the third novel in my Hope or High Water series and determined to finish before the summer is through. Broken Lines gives two side characters from Across Oceans and Twisted River their own story set amidst the months of fear and indecision leading up to America’s entrance into World War I. It has certainly required a different mindset to bring life to this novel, but I’m enjoying every minute of the creativity and especially the research.

So without further ado, here is the back cover blurb for Broken Lines:

With the threat of the Great War looming at America’s doorstep, fear of immigrant disloyalty has become enough to divide the nation. So when German-born Amara Müller’s brother decides to join the fight, he leaves her behind in St. Louis with one final directive: Stay safe. There’s only one certain way to keep herself out of suspicion’s spotlight, but will she have the courage to see it through?

Accustomed to a strict diet of cigars and spirits, Emil Kisch has become the master of a worry-free good time. And as one of St. Louis’s best morality squad detectives, he’s able to skirt the drinking laws as easily as he arrests others for breaking them. To him, war is a problem for other men. Until one night he makes a mistake that even a glass of whiskey can’t wash away. Is it too late to reverse the course set in motion?

As their lives are intertwined with the fate of the war, Emil and Amara must fight to save what they both hold most dear. But which side of the line do you stand on when your allegiance belongs to both?

So, what do you think? Love the synopsis? Think it could be better? Let me know your thoughts in the comments! 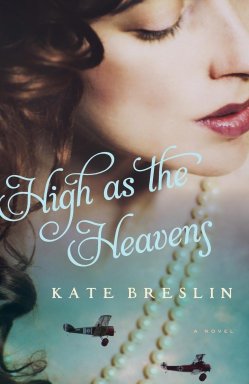 While in Gulf Shores this month, I read Kate Breslin’s most recent novel, Far Side of the Sea, the third in her series of WW1 spy novels. I read the first two earlier this year (Not by Sight and High as the Heavens), but was waiting for the third to be released so I could review them all together.

First of all, the covers are simply lovely and give a good idea of what to expect from these novels. All three stories keep fairly light as they have a strong romantic lean (but are non-explicit), making them good summer reads, but that doesn’t mean that they don’t have plenty of moments of intrigue. Kate does a great job with her research, providing so many little details as to make us feel like we’re really part of the war scene. She also includes many lesser known elements of The Great War such as the Women’s Forage Corps in Not by Sight, German-occupied Brussels in High as the Heavens, and the French/English government’s use of carrier pigeons in Far Side of the Sea.

High as the Heavens was probably my favorite of these three as I love seeing a story about a troubled/estranged marriage finding redemption. There are so many novels about how to fall in love, but so very few about how to stay that way, so I really enjoy it when I come across one done well. Not by Sight also had a unique viewpoint in that the main hero, Jack, is struck blind during a mission and as such, it results in a growing romance based entirely on personality rather than physical attraction.

These three novels do not need to be read in any particular order; however, characters from Not By Sight are mentioned in Far Side of the Sea, which leads to some spoilers if you haven’t read the first book.

In April, I had the pleasure of presenting at the Junior League of St. Louis. It was a chilly rainy day, but I still had a fantastic time discussing my books with such a fun group of women. Another huge thank you to them for inviting me!

Read it? Loved it? Tell others by writing a review!

Need a copy of either book in the Hope or High Water series? Click the photo below. 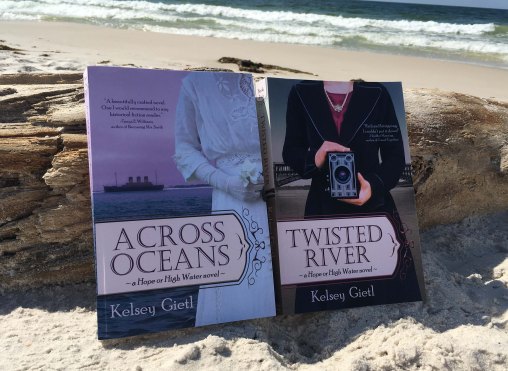 The best way to receive this newsletter is through e-mail. If you were directed to this site via social media or a search engine, you can subscribe to updates by entering your e-mail in the box at the bottom of this website. E-mail addresses are never sold or distributed. You may unsubscribe at any time.

4 thoughts on “June Newsletter – Back From the Beach”

This site uses Akismet to reduce spam. Learn how your comment data is processed.